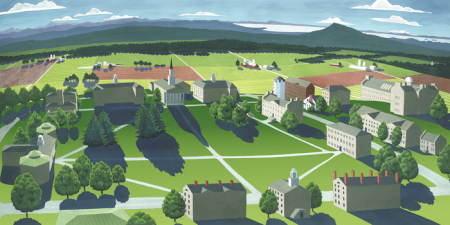 To celebrate the 200th birthday of my college, I took a ride with Spencer, in a balloon whose envelope I had designed, over the campus and the farm country to the west. It was a heavenly late summer afternoon with Lake Champlain glittering in the background behind Snake Mountain. The old stone buildings as well as the new ones cast deep purple shadows on the green, green lawns. I made sure to include tiny Carr Hall there on the lower right. In the 1950s, that was the entire art building. I like to say I was born in Carr Hall for it was there that I saw, in a darkened room, a glowing slide projection of Piero della Francesca’s “Flagellation” and realized for the first time that paintings are creations, not imitations.