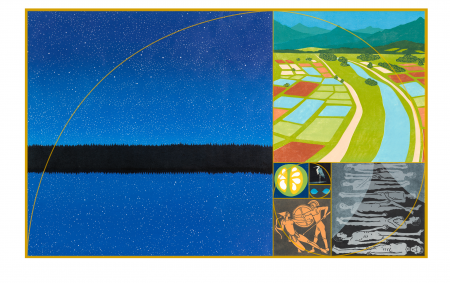 To order the world.  Big order that!  Artists are compelled to do it one way or another.  More or less, intuitively or with preconceived structure:  naming, sorting, analyzing, comparing, remaking in their own style as they grow from spontaneous children to professional fabricators of the world as it should be whether as architects, painters, potters or printmakers.   We are besotted with the beautiful, dumbstruck with desire to “fix” what is imperfect, despairing of our inadequacy.  And at the same time in love with what we see; each tiny grain of sand and each enormous sky.  What a dilemma!  What a thrill!

Our limitations mystify us.   We only experience from behind our own eyes.  My eye, MY “I” is the screen on which my own universe is recorded and from which my imagery is edited.  How to pick the essence to share?  How to make our visual autobiography both personal and universal?  Too tall an order.  And to seductive not to try.

The perfection of the Greek mathematical construct with which the ubiquitous spiral may be drawn seems both inevitable and inscrutable.  Mathematical beauty working outward to the universe and inward to the spiral of a gene.

Golden Rectangle I begins with the smallest arc:

Do you remember the first time you realized you were alone in this world?  That we are each a separate being unable to ever experience existence from anyone else’s point of view: isolated.  As Tennessee Williams said in “The Rose Tattoo”, “a prisoner in our own skin”.

Artists  constantly reach out for affirmation that they are NOT alone by describing their own place in space and time in hopes someone else will say “Yes, I see!”  We attempt to find a logic and an order to the physical world by describing it in terms of music and mathematics.  We delight in harmony.  We mourn confusion and conflict.  At the same time we cherish freedom to create our own world view that we may impose our interpretations on you. Our images say over and over “I love you, please love me!”

I’ve visualized history from childhood as a huge spiral unwinding from beyond outer space down to our very moment in time.  Thus the top image, “Golden Rectangle I”  begins  behind my own eyes as I look out from my solitary confinement and contemplate life on earth: its beginnings,the animal kingdom, love and war as depicted in Greek art and mass murder in our own time which coexists on the planet with earthly paradises recreated for our survival, and over all  the great sea and skyscapes as they were “In the Beginning”.

The bottom  image, “Golden Rectangle II” begins not with me but with “WE” the Western ideal of shared order as described in the Declaration of Independence. My image of a carp represents the animal kingdom.  Then comes a baby human in the womb followed by  pre-historic art of the hunt. Other technology creates  the beauty and order of agriculture and finally the virgin ocean moving to the rhythm of our planet’s moon and our star the Sun.

The images each get a place in the structure formed by a Fibonacci spiral which contains them and suggest a myriad other reflectaphors of life on Planet Earth, all manifesting in ways we do not yet understand but which move us to awe as well as terror.

Imagine filling a set of squares of your own as you contemplate the universe from your own point of view.

I made my images, some reproduced from the work of others, most newly conceived by me from travel and study first as linoleum or woodcuts at the scale here presented.  They werephotographed at North Light Editions in White River Junction, VT by Dave O’Neil who assembled them into  the Golden Rectangles and printed them on his Epsom press.

All the  images will be available as individual archival ink jet prints without the arcs of the spiral.