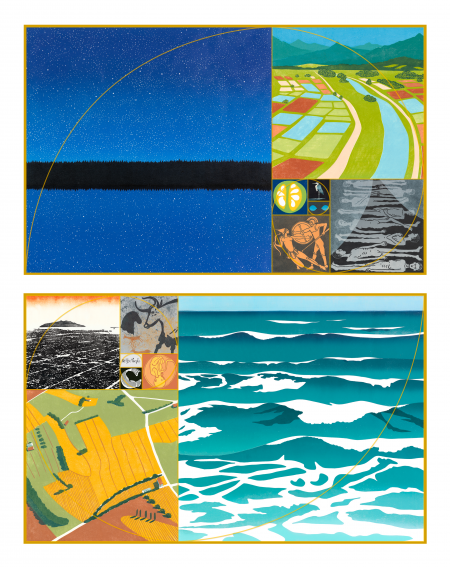 Do you remember the first time you realized you were alone in this world? That we, each a separate being unable to experience existence from anyone else’s point of view, are isolated—as Tennessee Williams said in The Rose Tattoo, “a prisoner in our own skin.”

Since childhood, I’ve visualized history as a huge spiral unwinding from the chaos of cosmic beginnings to our current moment.  Artists constantly reach out for affirmation that they are NOT alone by describing their own place in space and time in the hopes that someone else will say, “Yes, I see!” We attempt to find logic and order in the physical world by describing it in terms of mathematics but delight in the harmony of our own creative expression of the science we experience as life. We mourn confusion and conflict but cherish the freedom to create our own world-view and share our interpretations with others. Over and over, our images say, “I love you! Please, love me!”

In the top image, Golden Rectangle I, the spiral of my existence begins with my eyes, with which I look out from my solitary confinement and contemplate life. From my eyes, the spiral travels through the broader existence of others on earth: the animal kingdom (represented by the heron), the plant kingdom (represented by the seed fruit), love and war (represented by an ancient Greek pottery-derived depiction of Achilles killing the Amazon Queen, Penthesilea, only to realize the respect he feels for her bravery at that moment is love), the atrocity of genocide that sadly continues (represented by concentration camp victims), the coexistence alongside such atrocities of remote earthly paradises cultivated to ensure survival (represented by the taro fields of Hawaii), and back to the great night and sky as it was “in the beginning.”

In the bottom image, Golden Rectangle II, the spiral begins, not with me, but with “WE” and the Western ideal of shared order (represented by the Declaration of Independence). From there, the spiral of OUR existence travels back through the animal kingdom (represented by the carp), through birth (represented by the baby in the womb), and through the brutal reality of survival by killing (represented by the prehistoric hunt image from the caves of Altamira). Next, the Hiroshima image illustrates the use of technology for death and the irony of killing as a means to end war. This image is then juxtaposed with the use of technology for life by the image of Italian wheat fields, cultivated from B.C. to present, to nurture and continue our species. Last, we return to the primordial sea from which we came, that ebbs and flows to the rhythm of our time keepers, the sun and moon.

The perfection of the Greek mathematical construct with which the ubiquitous spiral may be drawn seems both inevitable and inscrutable.  Mathematical beauty working outward to the universe and inward to the spiral of a gene.

Some of these images are my own, others are reproductions of things I have seen in my travels and studies that impacted me.

Imagine filling out a progression of squares for a Golden Rectangle as you contemplate the universe from your own point of view. 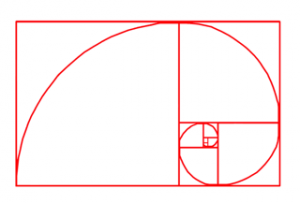